SS Michelangelo was an Italian ocean liner built in 1965 for Italian Line by Ansaldo Shipyards, Genoa along with her sister ship, the SS Raffaello.

The Italian Line began planning new ships in 1958. Originally they were to be slightly larger than SS Leonardo da Vinci, which was then being built, but jet aircraft had not yet had a notable effect on the Mediterranean area and a pair of genuine superliners seemed desirable, both from a commercial point of view and to provide jobs to sailors and shipyard workers. It was decided that the new ships would be the largest built in Italy since the SS Rex in 1932.

It was decided that accommodations aboard of the SS Michelangelo would be divided into three classes. For some reason, it was also decided that the three bottom-most passenger decks would not have any portholes. It has been claimed that this made the ship’s sleek hull shape, but that seems unlikely to be true as ships of similar length/width ratio have been built with windows along the entire hull.

Whatever the shortcomings in their initial design, though, the new sisters were advanced on the technological side. The most striking feature in the ships was their Turin polytechnic-designed funnels, which consisted of an intricate trellis-like pipework (instead of the traditional even surface) to allow wind to pass through the funnel, and a large smoke deflector fin on the top.

Although criticised, the funnel design proved to be highly effective in keeping smoke off the rear decks. The smoke deflectors became popular in ship design during the 1970s and 1980s, whereas the idea of allowing wind to pass through the funnel was picked up again in the late 1980s and is almost the norm in modern shipbuilding.

The Michelangelo’s interiors were designed by naval architects Nino Zoncada, Vincenzo Monaco and Amedeo Luccichenti, who gave the ship a less adventurous, more traditional look than the designers of her sister Raffaello.

Be the first to review “SS Michelangelo” Cancel reply 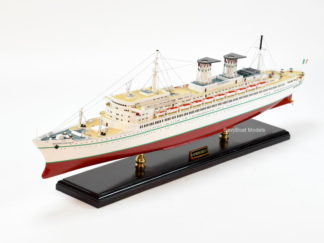