Named after the famous Italian inventor, the SS Leonardo da Vinci was built in 1960 for the italian line as a replacement for the SS Andrea Doria which was lost in 1956.  In 1976 she became the last passenger liner to be used across the North Atlantic.  She was scrapped in 1982.

Be the first to review “Leonardo da Vinci” Cancel reply 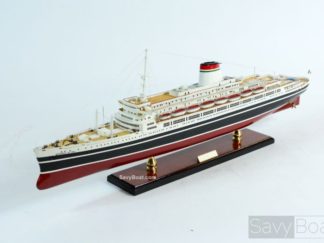