SS Rex is exquisitely handcrafted by our master craftsmen and comes fully assembled with a hollow hull – hand carved from kiln-dried woods.  Other parts are mainly made from a variety of woods and metals. As shown in the photos each model includes brass pedestals, a matt-finished black base board, and a brass name plate.

Our master model builder crafted this nicely detailed model from scratch using historical photographs, drawings, and original plan. In addition, we selected finest woods and material to build this model. Also, we used plank-on-frame construction method which is similar to the building of the actual ship.

You can find many features such as: All windows, doors, and portholes are cut out precisely thanks to hand-built hollow superstructure and hull; Open promenade decks visible through superstructure windows; Lattice grating on ducts and vents; Detail Lifeboats hung from launching davits; Delicate railings on forecastle, aftcastle and top superstructure; Rigging and stay-lines on all masts and smokestacks. Furthermore, we applied multi-layered paint to match the color of the real ship.

Rex, the largest Italian liner ever built, was also the only Italian ship ever to hold the Blue Riband. Built by G. Ansaldo & Co. of Sestri Ponente, she was launched in 1931 as Navigazione Generale Italiana’s Guglielmo Marconi. During fitting out, however, she became the property of the newly-created Italia Flotta Riunite and was renamed Rex.

Her maiden voyage from Genoa to New York began on 27 September 1932 but was delayed for three days at Gibraltar, where engine damage was repaired. By August 1933, though, there was nothing wrong with her engines and she set a westbound crossing record. She covered the 3,181 nautical miles from Gibraltar to Ambrose in 4 days, 13 hrs., 58 min., for an average speed of 28.92 knots, a knot better than the record set by NDL’s Europa a month earlier. Rex would hold this record until Normandie’s maiden voyage in 1935.

In April 1940, Rex made her last Atlantic crossing. She was laid up at Bari and, later, at Trieste. Rex was not involved in the war because her large size was thought to render her particularly vulnerable. She remained laid up even after Italy’s surrender in 1943, when she passed into German control. On 8 September 1944, off Capo d’Istria, she was hit by 123 rockets launched by RAF aircraft, caught fire from stem to stern, rolled onto her port side, and sank in shallow water. She was broken up at the site beginning in 1947. 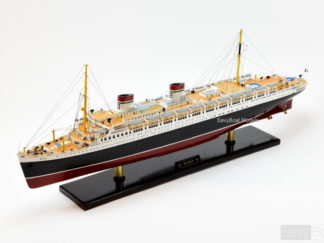