SS Raffaello was an Italian ocean liner built in the early 1960s for Italian Line by the Cantieri Riuniti dell’Adriatico, Trieste. Her sister ship was SS Michelangelo. It was one of the last ships to be built primarily for liner service across the North Atlantic.

In 1958, the Italian Line began planning new ships to replace the aging MS Saturnia and MS Vulcania. Competition from jet airliners had not yet had a huge impact in the Mediterranean area and jobs were needed for Italian sailors and shipyard workers, so constructing new superliners seemed like an attractive idea to Italian Line executives. Consequently, the new ships grew from the originally planned 35,000 tons to nearly 46,000 tons. They were the largest ships built in Italy since SS Rex and SS Conte di Savoia in the 1930s.

The Italian Line planned the ships as true ocean liners, divided into three classes. Oddly even for a liner, all cabins below A-deck were windowless, but on the technical side the ships were among the most advanced of their time. They featured retractable stabilizer wings, highly modernized engineering panels, and many other advantages. The funnels, in particular, were especially designed to keep smoke and soot from the rear decks. The funnel design proved to be highly effective, and it is a testament to their design that most funnels in modern passenger ships are built along similar principles.

The new ships’ interiors were in the Art Deco style so often associated with liners. Raffaello’s interiors were designed by architects such as Michele and Giancarlo Busiri Vici, who had not worked on liner interiors before. As a result, Raffaello gained highly futuristic, more distinctive, but more sterile interiors than the Michelangelo. Despite being planned as identical ships, Raffaello was 0.7 meters (2.3 feet) shorter, 0.40 meters (1.3 feet) wider, and approximately 22 tons larger than the Michelangelo.

Be the first to review “SS Raffaello” Cancel reply 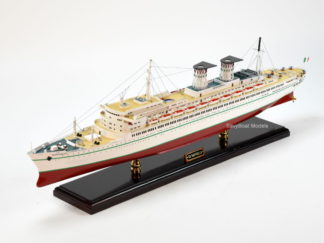