The SS Australis, a Chandris Lines flagship, retains a significant place in Australian immigration history as the last ship to carry government assisted immigrants to Australian shores in 1977. She had the largest passenger capacity of any post World War II immigrant ship to regularly visit Australia and many passengers fondly remember her grandeur and remnants of Art Deco style.

Originally named America, the immigrant ship Australis was designed by William Francis Gibbs and built for the North Atlantic trade – to travel between Europe and the United States. When launched on 31 August 1939 (by Mrs. Eleanor Roosevelt), she was the largest passenger vessel to have ever been constructed in the United States and provided luxury accommodation for 1202 passengers in three classes.

In the midst of World War II, she was taken over by the US Navy and converted to an American troop ship capable of carrying 8175 soldiers. Realising the impact on public sentiment should America be sunk, the American government quickly renamed the ship the USS West Point. During the war, she visited ports in Europe, Africa and South America and was frequently attacked by Japanese forces.

After 12 years on the North Atlantic trade following the war, she was sold to the Chandris Line in 1965 and christened Australis, being converted to a fully air conditioned single class ship for the Australian migrant trade. A large portion of her original interior styling was maintained, and she remained adorned with many murals and Art Deco floor coverings during her immigration years.

Be the first to review “SS Australis” Cancel reply 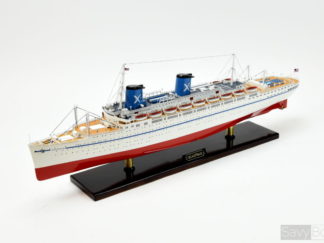