This is a beautiful HMHS Britannic model for your maritime collection. Our master craftsmen handcrafted this nicely detailed model from scratch using historical photographs, drawings, and original plans. In addition, we selected finest woods and material to build this model. Also, we used the plank-on-frame construction method to build the model to look exact of the actual ship.

HMHS Britannic was the final vessel of the White Star Line’s Olympic class of steamships. She was the fleet mate of both the RMS Olympic and the RMS Titanic and was intended to enter service as a transatlantic passenger liner. Britannic was launched just before the start of the First World War. She was designed to be the safest and most luxurious of the three ships, drawing lessons from the sinking of the Titanic. She was laid up at her builders, Harland and Wolff, in Belfast for many months before being put to use as a hospital ship in 1915. In 1915 and 1916 she served between the United Kingdom and the Dardanelles.

On the morning of 21 November 1916 she was shaken by an explosion caused by a naval mine near the Greek island of Kea. She foundered 55 minutes later, killing 30 people. There were 1,065 people on board; the 1,035 survivors were rescued from the water and lifeboats. Britannic was the largest ship lost in the First World War. The loss of the ship was compensated by the award of SS Bismarck to the White Star Line as part of post-war reparations, renamed RMS Majestic. The wreck was located and explored by reseach ship Calypso of Jacques-Yves Cousteau in 1975. The vessel is the largest passenger ship on the seafloor, followed by Titanic.

Be the first to review “HMHS BRITANNIC” Cancel reply 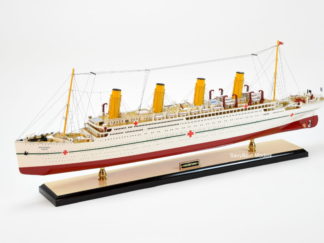