Mein Schiff 3 (English: My Ship 3) is a cruise ship owned by TUI Cruises. She was delivered from STX Finland Turku Shipyard on 22 May 2014 and will be followed by identical sister ships, Mein Schiff 4 in 2015, Mein Schiff 5 in 2016, Mein Schiff 6 in 2017. In addition, Mein Schiff 1 and Mein Schiff 2 were confirmed on 1 July 2015, with deliveries set for 2018 and 2019. These ships are built with environmentally friendly power plants and energy efficient solutions that reduce emissions by 30 percent in comparison to other cruise ships of similar size.

In the summer of 2006, just prior to the Mercury’s planned departure for an Alaska cruise, Seattle-based inspectors from the U.S. Coast Guard arrested the captain of the Mercury for intoxication. Celebrity Cruises arranged for a replacement, and fired the original captain.

During several cruises from Charleston, South Carolina to the eastern Caribbean in February 2010, the ship was struck with a major outbreak of norovirus, sickening nearly 500 people on board, out of a total of just over 1,800. According to Celebrity Cruises, those sickened were treated with over-the-counter medicine. Additionally, a doctor and two nurses joined the ship midway to assist with the outbreak.

Be the first to review “Mein Schiff 3” Cancel reply 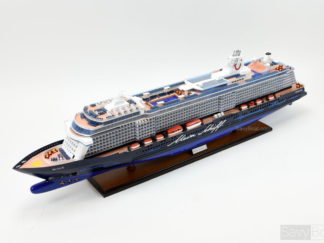