This is Exlusive Edition RMS Titanic model with highest details for collectors or home decor. Our master craftsmen handcrafted this nicely detailed model from scratch using historical photographs, drawings, and original plans. In addition, we selected the finest woods and material to build this model. Also, we use the plank-on-frame construction method which is similar to the building of the actual ship.

The model has many details such as: All windows, doors, and portholes are cut out precisely thanks to hand-built hollow superstructure and hull; Open promenade decks visible through superstructure windows; Lattice grating on ducts and vents; Detail Lifeboats hung from launching davits; Delicate railings on forecastle, aftcastle and top superstructure; Rigging and stay-lines on all masts and smokestacks… Furthermore, we applied multi-layered paint to match the color of the real ship.

Each model requires hundreds of hours to finish and must go through a demanding quality control process before leaving the workshop. She is mounted on a solid wood base and ready to display. It’ll make a perfect gift for home or office decorator, boat enthusiast, or passionate collector.

RMS Titanic White Star Line ocean liner most notably from the 1997 James Cameron film starring Leonardo DiCaprio & Kate Winslet. Titanic was a British passenger liner that sank in the North Atlantic Ocean in the early in the morning on April 15th, 1912. After colliding with an iceberg during her maiden voyage from Southampton to New York City the RMS Titanic sunk and of the 2,224 passengers and crew aboard, more than 1,500 died, making it one of the deadliest commercial peacetime maritime disasters in modern history.

Titanic was equipped with three main engines—two reciprocating four-cylinder, triple-expansion steam engines and one centrally placed low-pressure Parsons turbine—each driving a propeller. The two reciprocating engines had a combined output of 30,000 horsepower (22,000 kW). The output of the steam turbine was 16,000 horsepower (12,000 kW). She has  cruising speed of  21 kn (39 km/h; 24 mph) and max speed of 24 kn (44 km/h; 28 mph)

The White Star Line had used the same combination of engines on an earlier liner, the SS Laurentic, where it had been a great success. It provided a good combination of performance and speed; reciprocating engines by themselves were not powerful enough to propel an Olympic-class liner at the desired speeds, while turbines were sufficiently powerful but caused uncomfortable vibrations, a problem that affected the all-turbine Cunard liners Lusitania and Mauretania. By combining reciprocating engines with a turbine, fuel usage could be reduced and motive power increased, while using the same amount of steam 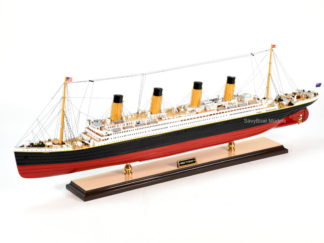