RMS Mauretania was an ocean liner designed by Leonard Peskett and built by Wigham Richardson and Swan Hunter for the British Cunard Line, launched on the afternoon of 20 September 1906. She was the world’s largest ship until the completion of RMS Olympic in 1911. Mauretania became a favorite among her passengers. She captured the Eastbound Blue Riband on her maiden return voyage in December 1907, then claimed the Westbound Blue Riband for the fastest transatlantic crossing during her 1909 season. She held both speed records for 20 years. Mauretania remained in service until 1934 when Cunard White Star retired her; scrapping commenced in 1935.

Mauretania and Lusitania were both designed by Cunard naval architect Leonard Peskett, with Swan Hunter and John Brown working from plans for an ocean greyhound with a stipulated service speed of twenty-four knots in moderate weather, as per the terms of her mail subsidy contract. Peskett’s original configuration for the ships in 1902 was a three-funnel design, when reciprocating engines were destined to be the powerplant. A giant model of the ships appeared in Shipbuilder’s magazine in this configuration. Cunard decided to change power plants to Parson’s new turbine technology, and the ship’s design was again modified when Peskett added a fourth funnel to the ship’s profile. Construction of the vessel finally began with the laying of the keel in August 1904.

In 1906, Mauretania was launched by the Duchess of Roxburghe. At the time of her launch, she was the largest moving structure ever built, and slightly larger in gross tonnage than Lusitania. The main visual differences between Mauretania and Lusitania were that Mauretania was five feet longer and had different vents. Mauretania also had two extra stages of turbine blades in her forward turbines, making her slightly faster than Lusitania. Mauretania and Lusitania were the only ships with direct-drive steam turbines to hold the Blue Riband; in later ships, reduction-geared turbines were mainly used. Mauretania’s usage of the steam turbine was the largest application yet of the then-new technology, developed by Charles Algernon Parsons. During speed trials, these engines caused significant vibration at high speeds; in response, Mauretania received strengthening members aft and redesigned propellers before entering service, which reduced vibration.

Be the first to review “RMS Mauretania” Cancel reply 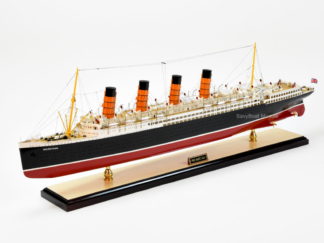