Built as “Imperator” for the Hamburg-Amerika Line, she made her maiden voyage from Cuxhaven to New York on the 20th of June 1913. From August 1914, she was in Hamburg harbor for the duration of the war. On the 5th May 1919, she was seized by US Navy as a troop transport and in February 1920, she was handed over to the Shipping Controller, London as reparation for the sinking of the “Lusitania” and sold to the Cunard Line, where she became the company’s flagship, later renamed “Berengaria”. In 1934, Cunard and White Star Line merged and on the 3rd March 1938 Berengaria caught fire in New York Harbour. On the 7th of November 1938, she was sold for scrap, following Cunard’s introduction of the giants “Queen Mary” and “Queen Elizabeth” two years previously.

Between 1920 and the entry into service of the “Queen Mary” in 1936, the Berengaria was the pride of the Cunard fleet. The ship, however, was originally built for the Hamburg-Amerika Line at the Vulcan Werft shipyard at Hamburg on the river Elbe. She was originally named “Imperator” and was launched on 23 May 1912. As she was launched only 5 weeks after the “Titanic” disaster, changes had been made both in hull design and the equipment on board in order to increase safety. At the time, the “Imperator” was the world’s largest ship.

During WWI the “Imperator” lay protected on the river Elbe. At the end of the war the Allied forces of occupation found the “Imperator” rusted, decaying and stuck in the mud. After serving as a troop transport until August 1919, she was transferred to Britain and it was made clear that the vessel would be managed by the Cunard Line. Retaining the name Imperator, she made her first voyage for Cunard on 11 December 1919 from New York to Southampton. On 21 February 1920 she made her first voyage from Liverpool to New York. She continued in this service but it was decided to change the name to “Berengaria”.

She was converted from coal to oil burning engines and a complete overhaul was carried out by Armstrong Whitworth & Co. on the Tyne. The ship, however, was not without her fair share of problems. In August 1922 the liner struck a submerged object which damaged one of her propellers. Later the same year she lost 36 feet of guard rail in the Atlantic during heavy weather. For the next 6 years, however, she operated successfully on Cunard’s express service in conjunction with the “Mauretania” and “Aquitania”. During the early 1930’s the ship went aground twice on the approaches to Southampton, although she suffered no real damage. 1933 saw another major overhaul for her in Southampton, during which the interior was upgraded. The withdrawal of the “Mauretania” in 1934 placed further pressure on “Berengaria” to operate more efficiently and in 1935 she set a record passage on the New York to Southampton route.

During an overhaul in Southampton in 1936, a fire broke out in the first class cabins on the starboard side of the ship. The fire was soon controlled and extinguished but there was considerable smoke and water damage. It was ascertained that the cause was again defective wiring, which was eventually to lead to her demise. She made Her final passage on the Southampton-Cherbourg-New York route on 23 February 1938. After she arrived in New York, on 3 March, a fire was discovered in the first class lounge. It took the ship’s crew and firemen over 3 hours to bring the blaze under control. After officials had examined the ship it was decided that they could not give her clearance to embark passengers. The following day she sailed back to Southampton where it was discovered that faulty wiring had again been the cause of the fire. Throughout her life she had been pagued by fires caused by faulty wiring and as the cost of renovation would be so high it was decided to withdraw the “Berengaria” from service altogether on 23 March 1938. For the next few months she lay idle in Southampton dock until 19 October, when it was decided to dispose of her.

Sir John Jarvis, MP bought the ship for demolition on the Tyne at Jarrow for £108,000. She sailed from Southampton on December. The furniture and fittings were auctioned in January 1939 and over 200 Jarrow men were employed in breaking up the old ship. The outbreak of war, however, meant that the men were required elsewhere so it was not until 1946 that the remains of the hull were towed to Rosyth for the final process of dismantling. By this time few people were interested in the remains of an old liner that had been built in the Imperial Germany of 1913.

Be the first to review “RMS Berengaria” Cancel reply 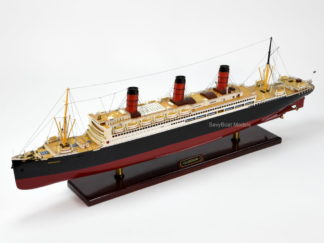