We offer this museum quality model SS Liberte ocean liner for your maritime collection. Our master craftsmen handcrafted this nicely detailed model from scratch using historical photographs, drawings, and original plans. In addition, we selected finest woods and material to build this model. Also, we used the plank-on-frame construction method which is similar to the building of the actual ship. Each model requires hundreds of hours to finish and must go through a demanding quality control process before leaving the workshop. We mount the model on a solid wood base and the model is ready to display. It’ll make a perfect gift for home or office decorator, boat enthusiast, or passionate collector.

After WW II, the Blue Riband winner SS Europa of North German Lloyd liner was transferred to French Line and then renamed Liberte at cost of $19 million refits.  The SS Liberte made her maiden voyage to New York in 1950.  She became the flagship for CGT French Line as a replacement for the legendary SS Normandie that had been lost during the Second World War.

On December 8, 1946 a storm caused her to break free from her moorings and she collided with the wreck of Paris, causing significant damage to her hull. She was raised in April 1947 and towed to the Chantiers de l’Atlantique Shipyard in Saint-Nazaire to complete her refitting. She suffered some further damage when the ship caught fire once again in October 1949, resulting in damage to some of her passenger space. After five years and two disasters, the crossing was uneventful, and she went on to serve as the premier transatlantic liner in the French Line fleet until the arrival of the 66,000-ton SS France in 1961. SS Liberte served as the pride of France and finally, Liberté was laid up in 1962 and scrapped at La Spezia, Italy, in 1963.

SS Liberté ocean liner was featured prominently in the Jane Russell film The French Line. The Liberté Liberté made an appearance in the opening credits of the 1953 film How to Marry a Millionaire, as well as the 1954 classic film Sabrina, starring Audrey Hepburn and Humphrey Bogart, in the final scenes of the film.

Be the first to review “SS Liberte” Cancel reply 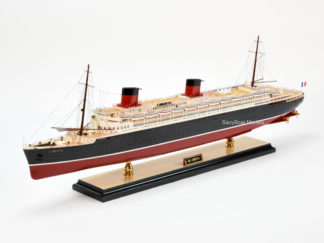