NS Yamal (Ямал) icebreaker is a Russian Arktika-class nuclear-powered ship operated by Atomflot (formerly by the Murmansk Shipping Company.) Laid down in Leningrad in 1986, and launched in October 1992, after the breakup of the Soviet Union, it filled its designed role of keeping shipping lanes open and also carried passengers on Arctic excursions. In July of 1994, Yamal took an excursion to the North Pole, with the NSF (National Science Foundation – US), to celebrate the official maiden voyage.

Yamal is equipped with a double hull. The outer hull is 48 mm (1.89 in) thick where ice is met and 25 mm (0.98 in) elsewhere and has a polymer coating to reduce friction. There is water ballast between the inner and outer hulls which can be shifted in order to aid icebreaking. Icebreaking is also assisted by an air bubbling system which can deliver 24 m3/s (850 cu ft/s) of air from jets 9 m (30 ft) below the surface. Yamal can break ice while making way either forwards or backwards.

Yamal carries one helicopter and several Zodiac boats. Radio and satellite communications systems are installed which can provide navigation, telephone, fax, and email services. Amenities include a large dining room (capable of holding all 100 passengers in one sitting), a library, passenger lounge, auditorium, volleyball court, gymnasium, heated indoor swimming pool, a sauna, and an infirmary. She is equipped with 50 passenger cabins and suites, all with toilets, exterior windows, a television, and a desk.

Yamal also played a significant role in creation of annual travel expeditions to the North Pole, being one of the few vessels capable of getting there and bringing tourists with it in safety. Since 1993 the icebreaker was operated by Murmansk Shipping Company and in 2001–2008 the operation was made by Murmansk Shipping Company and Poseidon Expeditions. Yamal has made a total of 47 voyages to the North Pole.

Be the first to review “Yamal icebreaker” Cancel reply 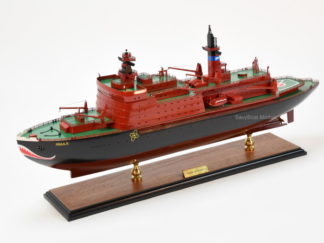