NS Savannah was the first nuclear-powered merchant ship. Built in the late 1950s at a cost of $46.9 million, including a $28.3 million nuclear reactor and fuel core, funded by United States government agencies,  Savannah was a demonstration project for the potential use of nuclear energy. Launched on July 21, 1959, and named after SS Savannah, the first steamship to cross the Atlantic ocean, she was in service between 1962 and 1972 as one of only four nuclear-powered cargo ships ever built. Savannah was deactivated in 1971 and after several moves has been moored at Pier 13 of the Canton Marine Terminal in Baltimore, Maryland, since 2008.

Savannah measures 596.5 feet (181.8 m) in length and 78 feet (24 m) in beam, with a loaded draft of 29.5 feet (9.0 m), and a loaded displacement of 21,800 tons. Savannah was built with seven cargo holds, a reactor compartment and a machinery compartment, making nine water-tight compartments. There are three full decks. The reactor compartment is located near the center of the ship, with the superstructure just aft of the reactor top to allow the reactor to be refuelled. Holds 1 through 4 are forward of the superstructure, with cargo handling gear between 1 and 2 and between 3 and 4. Cargo hold 5 is served by side ports, as it is located beneath the swimming pool. Holds 6 and 7 are aft of the superstructure.

The topmost deck of the superstructure comprises the pilothouse, radio room, chart room, a battery room and an emergency diesel generator. The next lower deck comprises the officers’ accommodations, with an officers’ lounge at the tapering rear portion of the superstructure. Below this level is the promenade deck comprising, from forward aft, the elliptical main lounge, the main stair and elevator, and the Veranda Lounge. The bar was provided with enclosed walkways outboard, and a glass wall overlooking the swimming pool and promenade deck aft. A dance floor was provided in the center of the lounge, surrounded by tables with illuminated glass tops. The back bar features a glass and metal sculptural interpretation of the periodic table of the elements. 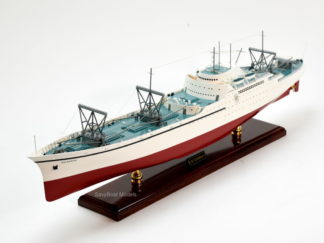