“The Unicorn” appears in the 2011 film The Adventures of Tintin: The Secret of the Unicorn

The Unicorn from The Adventures of TinTin

The La Licorne or “The Unicorn” in French, is a boat that appears in the Adventures of TinTin. It plays a pivotal role in the series during The Secret of the Unicorn and Redrackam’s Treasure, while also appearing in the 2011 animated version of the series.

The Unicorn was inspired by Le Brillant, built in 1690 at Le Havre, France by the shipwright Salicon and then decorated by the designer Jean Bérain the Elder. In 1942, Hergé had decided that his latest Tintin adventure, The Secret of the Unicorn (1943), should depict images of his fictional Unicorn as detailed precision drawings. He used the services of his friend and local model ship maker Gérard Liger-Belair, son of a former naval officer and who owned a shop in Brussels that specialised in model ships, to find an appropriate historical vessel that he could customize to meet his historical needs. Liger-Belair’s research produced three possibilities: A British frigate, a Dutch merchant vessel, and a French battleship. As Hergé preferred the battleship, Liger-Belair continued to research and discovered a historic document titled Architectura Navalis, which contained detailed drawings of French battleships. One in particular was from 1690, in the navy of Louis XIV of France: a fourth rank battleship with 56 cannons.

Details of the Ship

Be the first to review “La Licorne” Cancel reply 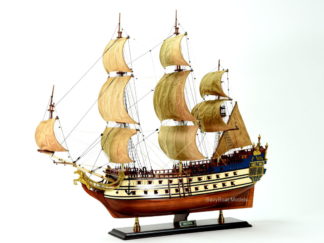