The Delta Queen is the nation’s last authentic overnight passenger steamboat that is still fully intact and capable of traveling the inland waterways of America.

The legendary vessel and her identical twin, the Delta King, were built in 1926 and entered service on June 2, 1927. At the time, they were the most extravagant river steamboats ever constructed, costing over $1 million each to build and furnish. While in service by the California Transportation Company, the Delta duo carried freight and produce on their main decks while offering luxurious accommodations to passengers commuting between San Francisco and Sacramento each night. The pair continued this way until 1940, when improved highways and rail service forced them out of service.

The steamers didn’t sit idle long. As the nation was gripped by World War II, the Delta Queen was commissioned by the United States Navy to ferry troops from shallow water piers to and from ocean-going vessels in San Francisco Bay. Painted in battleship gray and designated YFB-56, the Delta Queen transported up to 3,000 military members during each trip. The vessel received the first wounded troops following the attack on Pearl Harbor, ferrying them to shore-based hospitals in San Francisco. In 1946, as the war drew to a close, the Delta Queen and Delta King were declared surplus by the Navy and prepared for auction.

Meanwhile, on the Ohio River, Captain Tom Greene was enjoying the success of his own tourist steamer, the Gordon C. Greene.  Greene had grand visions of operating the largest and most luxurious steamboat plying the rivers. When the government put the Delta twins on the auction block, Greene bid $23,000 on the Delta King and was unsuccessful. Not wanting to be outbid a second time, he entered a bid of $46,000 for the Delta Queen. With no other bids, the Navy awarded the vessel to Greene and his family.

After a 5,000-mile journey down the California coast, through the Panama Canal and across the Gulf of Mexico, the Delta Queen arrived in New Orleans. She then traveled upriver to Dravo Shipyards in Pittsburgh, Pennsylvania for a $500,000 renovation.

Under the ownership of Greene Line Steamers, the Delta Queen entered the tourist trade in 1948 and quickly made a name for herself on the waterways. Over the next two decades, she traveled the Mississippi River and Ohio River in their entireties, stopping in more than 80 ports across the Midwest and South.

In 1966, an ocean-bound cruise ship with a wooden super structure caught fire, resulting in the deaths of many passengers. The U.S. Congress quickly enacted the Safety at Sea Act, which required any vessel carrying more than 50 overnight passengers to be constructed entirely of non-combustible materials. As the only overnight passenger vessel operating on the inland rivers, the Delta Queen was inadvertently included in this law aimed at ocean going ships and forced out of service.

Based on the Delta Queen’s impeccable safety record and close proximity to land at all times, Congress granted her an exemption from the new law. The exemption was continually renewed with overwhelming support until 2008, when the boat’s prior owners failed to take the necessary steps to obtain a renewal.

A year later, the Delta Queen docked in Chattanooga, Tennessee, where she became a floating hotel while her owners sought new ownership. Visitors enjoyed her Victorian charm and nostalgic grandeur, but behind the scenes, her once state-of-the-art machinery began to decay while sitting dormant along the riverfront. The future of the nation’s last authentic overnight steamboat was grim. Without her, an important chapter of maritime history would come to a close.

In 2010, a group of loyal supporters with a shared vision launched a mission to preserve the historic Delta Queen. The group purchased the vessel and led a decade-long legislative effort to allow her rightful return to the waterways. With steadfast support from Ohio Congressman Steve Chabot and Missouri Senators Claire McCaskill and Roy Blunt, the bill successfully moved through the legislature and landed on President Donald Trump’s desk. He signed the Delta Queen’s exemption from the 1966 Safety at Sea Act into law on December 4, 2018.

The President’s action will allow the Delta Queen to return to overnight cruise service through 2028.

At this time, the renowned vessel is undergoing many mechanical, safety, and cosmetic upgrades. When renovations are complete, the Delta Queen is expected to return to her rightful place on America’s inland waterways in late 2020.

Be the first to review “Delta Queen Steamboat” Cancel reply 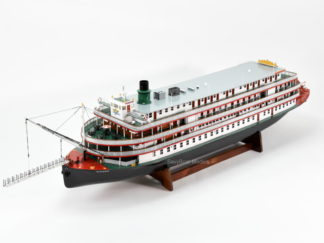