Construction on project no. 10521 started on 4 October 1989, at the Baltic Works in Leningrad (now Saint Petersburg), USSR. Originally 50 Let Pobedy was named Ural. Work was halted in 1994 for lack of funds, so that the actual fiftieth anniversary of Victory Day in 1995, after which she was named, found the ship in an abandoned state. Construction was restarted in 2003.

On 30 November 2004, a fire broke out on the ship. All workers aboard the vessel had to be evacuated while the fire crews battled the fire for some 20 hours before getting it under control. 50 Let Pobedy was finally completed in the beginning of 2007, after the 60th Anniversary. The icebreaker sailed into the Gulf of Finland for two weeks of sea trials on 1 February 2007. Upon completing sea trials, the icebreaker returned to St. Petersburg Baltic shipyard and started preparations for her maiden voyage to Murmansk, her homeport. The new ship showed superior characteristics for an icebreaker, such as exceptional maneuverability and a top speed of 21.4 knots (39.6 km/h; 24.6 mph).

Now you can get this beautiful 50 Let Pobedy Icebreaker model for your home or office. Our master craftsmen handcrafted this nicely detailed model from scratch using historical photographs, drawings, and original plans. In addition, we selected the finest woods and material to build this model. Also, we use the plank-on-frame construction method which is similar to the building of the actual ship.

Each model requires hundreds of hours to finish and must go through a demanding quality control process before leaving the workshop. She is mounted on a solid wood base and ready to display. It’ll make a perfect gift for home or office decorator, boat enthusiast, or passionate collector.

Be the first to review “50 Let Pobedy Icebreaker” Cancel reply 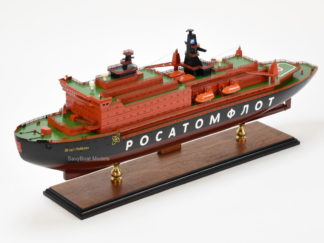