Celebrity Cruises was founded in 1989 by the Greece-based Chandris Group, which established the line’s reputation as an up-market big-ship operator. The line’s signature “X,” displayed on the funnel of all Celebrity ships (minus the expedition vessels) is actually the Greek letter chi, for “Chandris.”

With the introduction of Celebrity Solstice, the first of the line’s Solstice-class ships, in November 2008, Celebrity took its vision to the next level and its ships to another size — all are about 30 percent larger than Celebrity’s Millennium-class ships. With the extra space, Celebrity shook up the cruise industry with the introduction of its top deck Lawn Club — an oasis of real grass perfect for picnics, lounging and playing classic lawn games like bocce ball.

With the introduction of its Solstice Class, Celebrity Cruises rocked the notion that a cruise line that positions itself in the “premium” market must keep its ships small and cozy. At the same time, doubts emerged about the fate of its Millennium-class ships, but the line managed quite nicely, adding a series of enhancements that pleased even the most stalwart fans of smaller ships

Summit, Infinity and Millennium underwent further renovation in 2015 and 2016, adding a top-deck movie viewing area, called the Rooftop Terrace, and Tuscan Grille restaurants. The Bistro on Five creperie also transitioned to Sushi on Five, an a la carte sushi restaurant, in 2016.

Celebrity Cruises hasn’t been known as an innovator since the Solstice Class debuted, but with the launch of its Edge Class, whch debuted in December 2018, the line is shifting once again toward trendy innovations that are sure to make a lasting impression. First and foremost of these is the Magic Carpet, a tennis court-sized moveable deck that is cantilevered off the side of the ship and can move up and down — as low as Deck 2 and high as Deck 16. The function of the Magic Carpet depends on which deck it’s been placed. For instance, on Deck 2 it serves as a throughway for passengers getting onto and off tender boats, while on Deck 5 it serves as an alfresco extension to a raw bar restaurant. On Deck 14 it’ll function as a location for happy hours and late-night parties, and all the way up on Deck 16, it’ll transform into an alternative restaurant.

Be the first to review “Celebrity Reflection Solstice” Cancel reply 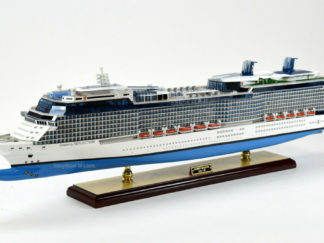