The famous Black Pearl pirate ship from the “Pirates of the Caribbean” movies.

Now you can get this beautiful Black Pearl pirate ship for your collection. Our master craftsmen handcrafted this nicely detailed model from scratch using historical photographs, drawings, and original plan. We selected finest woods and material to build this model. Also, we use “plank on bulkhead” construction method which is similar to the building of the actual ship.

You can find many details of the model such as: complex rigging with hundreds of blocks and deadeyes, figurehead, cannons, anchors, bell, and other fittings made from metal. Furthermore, we hand-painted multi-layered paint to match the color of the real ship. Each model requires hundreds of hours to finish and must go through a demanding quality control process before leaving the workshop. This pirate ship model is mounted on a solid wood base and ready to display. It’ll make a perfect gift for home or office decorator, boat enthusiast, or passionate collector.

The Black Pearl pirate ship is a fictional ship in Pirates of the Caribbean. In the screenplay, we can easily recognize the Black Pearl by her distinctive black hull and sails. This turns out to be an advantage in more than one way. Not only do the black sails act as a sort of intimidation tactic, but the Pearls crew can put out the deck lamps for added stealth at night.

The ship was originally named Wicked Wench before she was ordered burned and sunk by Lord Beckett. Davy Jones raised her from the sea floor after making a pact with Jack Sparrow who rechristened her the Black Pearl. They said she is “nigh uncatchable”. Indeed, in the three films, she either overtakes or flees all other ships, including the Interceptor (regarded as the fastest ship in the Caribbean) and the Flying Dutchman (which is actually faster against the wind). Her speed is derived from a large amount of sails she carries. She is noted in At Worlds End as being “The only ship as which can outrun the Flying Dutchman.” 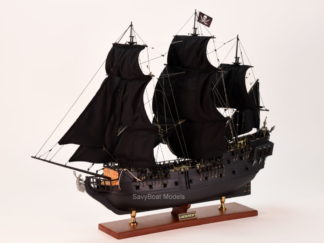