This is a gorgeous museum-quality model of the Flying Dutchman. She is legendary ghost ship that can never make port and sail in the oceans forever. This ship model has a unique wood inlay base and many hand carved sculpture details. SavyBoat’s master craftsmen build the ship model using historical photographs, drawings or original plans. We built her to scale with high-grade wood such as: western red cedar, rosewood, and mahogany. We handcrafted the ship model using plank-on-frame construction method which is similar to the building of actual ship. Each model requires hundreds of hours to finish and must go through a demanding quality control process before leaving the workshop

This magnificent Flying Dutchman model features two decks, and two rows of ferocious cannons on each side of the ship. A unique bowsprit design that consists of skeleton statues and crafted wood ornaments. Three large masts connected securely using advanced complex rigging and lines painstakingly knotted and fastened by hand with hundreds of blocks and deadeyes. Each yard has an attached aging handmade sails made of fine linen. Metal anchors and a wooden rudder are visible on the front and rear of the ship. On the stern of the ship, there are many sculpture details handmade from woods. The ship model sit on a unique marquetry base made from 100s of individual small wood pieces inlay.

The Flying Dutchman was an infamous supernatural ghost ship. Originally, Dutchman’s task is to collect all the poor souls who died at sea and ferrying them to the afterlife. During the Golden Age of Piracy, the Dutchman would become a ship feared by many across the seven seas.

Flying Dutchman was given to Davy Jones by his love, the sea goddess Calypso, who gave Jones the duty of ferrying the souls who died at sea into the next world. After ten years, Jones would be free to come ashore to be with Calypso. But whenever Davy Jones came ashore, Calypso was nowhere to be found. This ultimately resulted in Jones carving out his own heart, and locking it in the Dead Man’s Chest. Jones abandoned his duty, instead wreaking havoc on the seas and unleashing the Kraken upon many vessels. He also preyed on wayward sailors lost at sea who wished to avoid death and final judgment, press-ganging them into his crew, eventually becoming part of the Dutchman itself.

Many years later, the crew of the Black Pearl would run afoul of the Flying Dutchman due to Jack Sparrow’s debt with its captain. Sparrow tried to escape service aboard the Dutchman by possessing Jones’ heart. The heart later found its way into the possession of Lord Cutler Beckett of the East India Trading Company, who would use the Flying Dutchman and its crew to lead his armada in the War Against Piracy. This eventually forced a confrontation with the Brethren Court off the coast of Shipwreck Island. The Flying Dutchman became locked in a titanic battle with the Black Pearl. In the midst of the chaos, Will Turner stabbed the heart of Davy Jones, killing Jones and replacing him as the new captain of the Dutchman.

With the death of Davy Jones, both the Flying Dutchman and its crew returned to their former forms. They aided the pirates in destroying the HMS Endeavour, defeating Beckett.  Approximately two decades later, the curse aboard the ship was broken, leaving the current status of the ship, its crew, and its purpose unknown.

Be the first to review “FLYING DUTCHMAN” Cancel reply 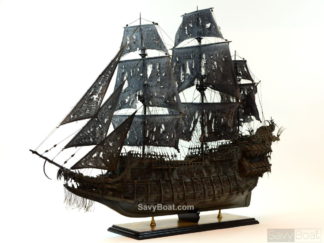