During the Thirty Years’ War King Gustavus Adolphus of Sweden ordered the building of a considerable number of large warships. They included the WASA which was already under construction and was originally to be called NY WASSAN. The total cost of building the vessel was approximately 100,000 imperial talers.

By July the 31st of 1628 all the cannons were on board and an the 10th of August of 1628 between 3 p.m. and 4 p.m. the WASA set sail on her maiden voyage. Once she was some way out to sea, she caught the wind in her sails. A few minutes later, a sudden squall forced the ship onto her side and first attempts to right her were unsuccessful. Huge quantities of water entered through the open gun ports, the bottom row of which were only about 1.20 m to 1.50 m above water-level. At the island of Beckholmen the WASA sank in 32 m of water. Salvage Operations began on l3th August 1628 and succeeded in bringing the WASA onto an even keel. However, it was not until 20th August 1959 that she was able to be raised for the first time by means of two pontoons. After 28 days a tug-boat towed the WASA 500 m to shallow water. By April 24th of 1961 all the preparations for raising the WASA out of the water had been completed. On May 4th of 1961, the vessel sailed in her own keel into a dry dock. In the meantime an enormous concrete pontoon had been built, which a short time later, became the ship’s permanent home. lt is entirely thanks to the fact that the shipworm (teredo navalis) cannot live in the cold waters of the Baltic Sea that the WASA still exists today. She is the oldest preserved and fully identified vessel currently known. She is berthed at the WASA shipyard in Stockholm.

Be the first to review “WASA” Cancel reply 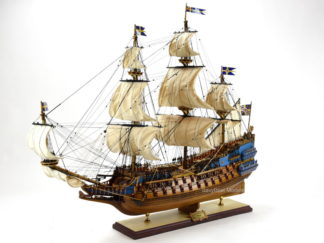