Tirpitz was the second of two Bismarck-class battleships built for Nazi Germany’s Kriegsmarine during World War II and was named after Grand Admiral Alfred von Tirpitz.

in 1942, the ship sailed to Norway to act as a deterrent against an Allied invasion and in September 1943, Tirpitz, along with the battleship Scharnhorst, bombarded Allied positions on Spitzbergen, the only time the ship used her main battery in an offensive role.

On 12 November 1944, British Lancaster bombers scored two direct hits and a near miss which caused the ship to capsize rapidly. A deck fire spread to the ammunition magazine for one of the main battery turrets, which caused a large explosion. Between 1948 and 1957 the wreck was broken up by a joint Norwegian and German salvage operation.

Be the first to review “Tirpitz” Cancel reply 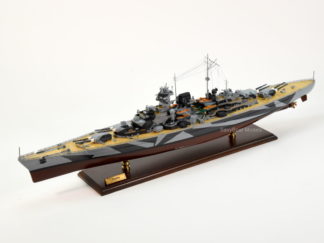