A miniature scaled model for those who can appreciate one of the most iconic sports cars of all time.

Tetsuma wanted to start our journey into the collector’s world by launching our line of models with a vehicle that spoke to everyone from all corners of car culture. For this reason, they made the decision to recreate a Porsche 911 (964) Resto-mod into a 1:64 scale model car. Being from the automotive community ourselves, we often hear that the Porsche 911 is the car that most enthusiasts seem to reach for as a goal. There’s no doubt that it’s one of the most respected vehicles to have ever been produced and have inspired generations of people to represent the Württemberg-Stuttgart badge.

Porsche’s non-purist, “outlaw”, or “resto-mod” scene has been growing quickly in the last decade with the help of social media and some of its greatest car building influencers like Akira Nakai (R.W.B.), Bisi Ezerioha (Bisimoto Engineering), Magnus Walker, and Robert Dickinson (Singer Vehicle Design) amongst others. Restoring, rebuilding, and modifying these aging icons are very important to keep them relevant and up-to-date, but are often frowned upon by traditional enthusiasts. Nonetheless, the amount of thought, work, and engineering that goes into creating these vehicles cannot be overlooked.

Be the first to review “TETSUMA 1:64 Porsche 964 Restomod” Cancel reply 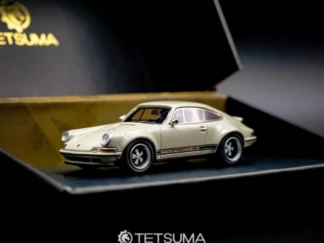