Seawise Giant, later Happy Giant, Jahre Viking, Knock Nevis, Oppama, and finally Mont, was a ULCC supertanker that was the longest ship ever built. She possessed the greatest deadweight tonnage ever recorded. Fully loaded, her displacement was 657,019 tonnes (646,642 long tons; 724,239 short tons), the heaviest ship of any kind, and with a laden draft of 24.6 m (81 ft), she was incapable of navigating the English Channel, the Suez Canal or the Panama Canal. Overall, she is generally considered the largest ship ever built. She was sunk during the Iran–Iraq War, but was later salvaged and restored to service. She was last used as a floating storage and offloading unit (FSO) moored off the coast of Qatar in the Persian Gulf at the Al Shaheen Oil Field.

The vessel was sold to Indian ship breakers, and renamed Mont for its final journey in December 2009. After clearing Indian customs she sailed to Alang, Gujarat where she 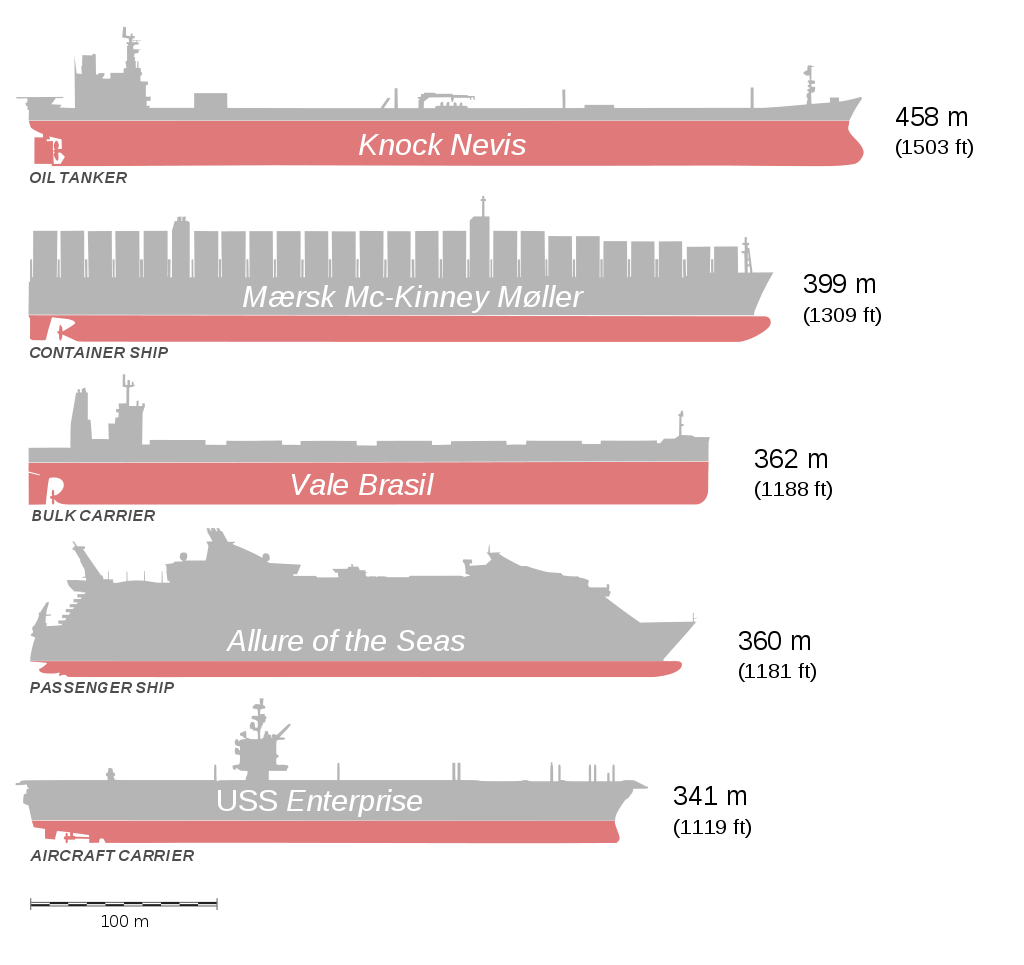 was beached for scrapping

Seawise Giant was ordered in 1974 and delivered in 1979 by Sumitomo Heavy Industries, Ltd. at its Oppama shipyard in Yokosuka, Kanagawa, Japan as a 418,611 ton ULCC. This was the longest ship ever constructed, at 458.45m, longer than the height of many of the world’s tallest buildings: although slightly smaller than Taipei 101’s 509 m (1,670 ft), it was larger than the Petronas Twin Towers’ 451.9 m (1,483 ft). Despite its great length, Seawise Giant was not the largest ship by gross tonnage, ranking fifth at 260,941 GT, behind the four 274,838 to 275,276 GT Batillus-class supertankers. It is the longest and largest by deadweight: 564,763 tonnes. Batillus-class ships and Seawise Giant were the largest self-propelled objects ever constructed.

Seawise Giant was featured on the BBC series Jeremy Clarkson’s Extreme Machines while it was underway as Jahre Viking. According to its captain, S. K. Mohan, it could reach up to 16.5 knots (30.6 km/h) in good weather, it took 9 km (5 1⁄2 miles) to stop from that speed, and its turning circle in clear weather was about 3 km (2 miles).

Be the first to review “Knock Nevis” Cancel reply