The voyage of the ‘James Caird’ was an epic boat journey from Elephant Island (Antarctica) to South Georgia in the southern Atlantic Ocean, a total distance of approximately 830 nautical miles (1,500 km; 920 mi). Undertaken by Sir Ernest Shackleton and five companions, their objective was to obtain rescue for the main body of the Imperial Trans-Antarctic Expedition (1914–17), marooned on Elephant Island after the loss of their ship Endurance. History has come to know the voyage of the James Caird as one of the greatest small-boat journeys of all time.

In October 1915 the Endurance had been crushed and sunk by pack ice in the Weddell Sea, leaving Shackleton and 27 men stranded on the frozen surface of the ocean, thousands of miles from civilization. The three ships lifeboats where mounted on sleds and dragged toward the Antarctic Peninsula (Paulet Island) in the hope of finding a cache of food supplies abandoned by the Swedish Antarctic Expedition, 1902. Failing to make the mileage, the long haul was abandoned. During the months that followed the party drifted northward towards the open sea until 9th April 1916, when the ice floe on which they were camped broke up under the swell.

Shackleton and his men made their way across the broken pack ice towards the remote and inaccessible Elephant Island, where Shackleton quickly decided that the most effective means of obtaining relief for his beleaguered party would be to sail the largest of the lifeboats to South Georgia. Of the three lifeboats, the James Caird was deemed the most seaworthy. It was named by Shackleton after Sir James Caird, a Dundee jute manufacturer and philanthropist whose sponsorship had helped finance the expedition.

Be the first to review “James Caird” Cancel reply 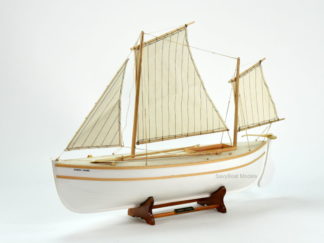