In 1869 John Willis, a shipowner and ship’s captain from London, commissioned the building of the clipper CUTTY SARK in order to beat the THERMOPYLAE (built one year before) in the “tea race”. The name CUTTY SARK is of Scottish origin and means “short shirt”. The figurehead is a witch called Nannie.

Under 1877 the full-rig ship sailed almost exclusively as a tea dipper on the China route and she frequently achieved speeds of up to 17 knots. Then from 1877 onwards the CUTTY SARK served mainly in the Australian wool trade.

In 1895 she was sold to a Lisbon based company called J.A. Ferreira and her name was also changed to FERREIRA. However, she was more often referred to as EL PEQUINA CAMISOLA, the Portuguese for “short shirt”.

In 1916, the ship lost her masts in a storm. She put into harbour at Cape Town for emergency repairs and was newly rigged as a barquentine.

In 1922 she was purchased by Captain Wilfred Dowmann from England and was given back her original name of CUTTY SARK. In June 1938 she departed from London under tow – her last voyage on open water. Then, in 1951 she underwent a thorough examination in Millwall dry dock and was found to be in perfect condition.

She ended her career in 1953 as a training ship and the “Cutty Sark Preservation Society” was founded. She was given the necessary overhaul in the East India Dock and on 10th July 1954 the CUTTY SARK was towed to her dry-berth in Greenwich.

On June 25th of 1957 the Queen opened the CUTTY SARK to the public. The CUTTY SARK now become one of the most famous tourist attractions at Greenwich. On this walk you won’t hear about the history of the ship because this is no ordinary walk. Instead you will hear from Louis Dore whose grandfather actually worked on the Cutty Sark.

Be the first to review “Cutty Sark 34″” Cancel reply 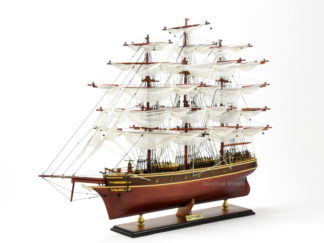