We now offer our new model of the famous school ship Amerigo Vespucci of the Italian Navy. She was planned by lieutenant colonel Francesco Rotundi, following the trends of sailing warships. She was launched in 1931 at the Navy ship yards of Castellammare di Staia Naples.

In the late 1920s, the Italian navy began construction of two ships for training their officer cadets at Sea, Cristoforo Colombo and Amerigo Vespucci: The first, the Cristoforo Colombo, was put into service in 1928 and was used by the Italian Navy until 1943. After World War II, this ship was handed over to the USSR as part of the war reparations and was shortly afterwards decommissioned. The second ship was the Amerigo Vespucci, built in 1930 at the (formerly Royal) Naval Shipyard of Castellammare di Stabia (Naples). She was launched on February 22, 1931, and put into service in July of that year.

The three steel masts are 50, 54 and 43 metres high, and carry sails totalling 2824 m² (30400 ft²) The Amerigo Vespucci has 26 sails – square sails, staysails, and jibs: all are traditional canvas sails. When under sail in severe sea and wind conditions she can reach 12 knots (22 km/h). The rig, some 30 km of ropes, uses only traditional hemp ropes; only the mooring lines are synthetic, to comply with port regulations.

The hull is painted black with two white stripes, harking back to the two gun decks of the ships her design is based on, but she carries only two 6pdr saluting guns in pivot mountings on the deck, forward of the mainmast. The deck planks are of teak wood and must be replaced every three years. Bow and stern are decorated with intricate ornaments; she has a life-size figurehead of Amerigo Vespucci. The stern gallery is accessible only through the Captain’s saloon.

The standard crew of the Amerigo Vespucci is 16 officers, 70 non-commissioned officers and 190 sailors. In summer, when she embarks the midshipmen of the Naval Academy (Accademia Navale), the crew totals some 450.

Since 1964 the ship has been fitted with two 4-stroke, 8-cylinder FIAT B 308 ESS diesel engines, which replaced the original 2-stroke 6-cylinder FIAT Q 426 engines. The newer engines generate electric power for one electric propulsion motor that can produce up to about 1471 kW (2000 hp).

Be the first to review “Amerigo Vespucci” Cancel reply 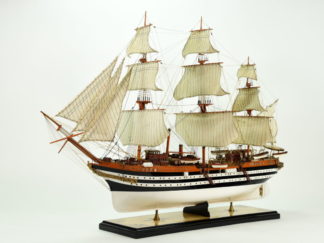