The SS American Scout C2 cargo ship was one of the first standardized designs developed by the newly-created U.S. Maritime Commission and one of the American States Lines C-2 style transports. These cargo ships had and overall length of 459′ and had five cargo holds. They were among the larger cargo ships of the era. The American Scout served well past World War Two before finally being beached and abandoned after a loading incident in 1969.

A major technical improvement over World War I-era vessels, the C2 could travel at 15.5 knots and carry 500,000 cubic feet of cargo, a relatively large amount at the time. They were able to efficiently establish such high rates of speed because they were powered by steam turbine engines with finely-manufactured reduction gears. Difficulty in maintaining a steady supply of these gears was a constant constraint on the construction of these ships during World War II.

The vessels also had noticeably improved crew accommodations, with all passengers and crew now housed amidships and with hot-and-cold running water throughout. The standard C2 cargo ship was 460 feet long with a beam of 63 feet. Depending on engine type, the vessels carried between 8,700 and 9,800 deadweight tons. 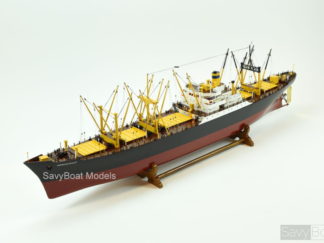