“At the end of the depression, sales steadily increased. This prosperity of the late ’30s was very short lived, as the nation was being drawn into the second world war effort, The Century Boat Company supplied over 3,500 small assault boats. This dedication earned the defense department’s Army-Navy “E” flag.

“Following this conflict, it was time to resume normal operations. Century revamped the line with new designs that would carry into the late fifties. These post-war craft were made wider and more sleek with a lower freeboard and more powerful engines. There was also emerging a shift in the boating market, the Sea Maids would be gradually supplanted by the highly versatile utility type Resorter models.

“The Resorters proved ideal for the average boater. They came in several sizes ranging from 15 to 21 feet. The open hull yielded complete freedom of movement and great adaptability while retaining the grace and beauty Century was known for. Finally with the emergence of water-skiing, the Resorter gained recognition as an ideal ski boat. It was chosen as the official boat for the national and international competitions through the latter half of the ’50s.

“This ski towing superiority and trend-setting styles, together with newfound racing championships jetted Century to the forefront of buyer awareness. The new models of the ’50s, the Coronado, Arabian, Viking, and Palomino incorporated the stunning design trends of the automobile industry from that time. The products of these innovation were painted design schemes, classy hardtop, and fiberglass panels in the structure of the mahogany boat. Many of the models introduced back in the ’40s and ’50s remain in the Century fold still.

“In 1969, Century completed a four-year change to complete fiberglass boat building. The history of this outstanding company has been written by retired vice-president, William Wittig in the book “The Story of the Century.” Former company president Al Hegg commissioned Mr. Wittig to write the book in 1983. It covers the company’s years of progress from its founding up to the boats of 1985.” 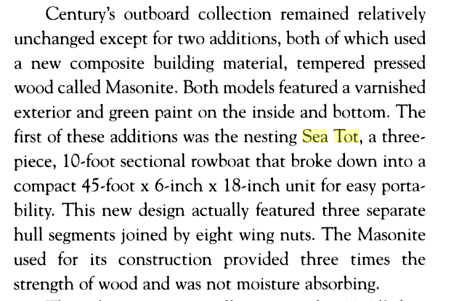 1940’s
Century was awarded a government contract to manufacture 3600 boats for WWII. Century received the Army-Navy E Citation for high achievement in the production of materials.

1950’s
The “Thoroughbred of Boats” slogan was created. The popular Coronado boats were used in two Hollywood films. Century had 343 authorized dealers.

1970’s
Century began to grow the Parts, Sales and Marketing departments. They also purchased a fleet of tractor-trailers to haul their own product.

1980’s
The Panama City plant was opened in 1983 where they reside today. The Century Tournament Skier was introduced as well as the Miramar model.

2000’s
To meet consumer demand, Century began producing a selection of small and medium-sized center console boats and a new 19-foot Bay Boat. In March of 2005 Century sold Cobia brand moving to One Brand, One Vision.

TODAY — Date?
Century offers a full line of saltwater fishing boats from 17′ – 32′ including walkaround, center console, dual console and inshore models to meet the demand of pleasure and tournament anglers.

The company was founded in 1926 at 333 Blecher Street in Milwaukee, WI by two brothers James and William Welch who had a knack for building wooden plank hulls that were designed for speed.

In 1928 the company was moved to Manistee, Michigan where it operated for the next sixty years. In 1930 its Century Hurricane held the world speedboat record of 50.93 miles per hour. By 1937 the company offered 28 models of boats to choose from. The 1940s brought about World War II and the firm received a contract and delivered 3,600 vessels receiving the Army-Navy E Award for excellence in production material. The company had 343 authorized dealers by 1950 and used the slogan “The Thoroughbred of Boats”.

In the 1960s Century introduced 45′ motor yachts and jet-powered boats; in 1967 the last wooden boat rolled out of the Manastee facility in favor of fiberglass. 1970 proved to be the greatest decade for the company; it even had a fleet of white tractor trailers that moved them from Manistee across the country to its dealerships. In 1983 it opened a production facility in Panama City, FL. (Grant therefor notes his boat, a 1981 Century Resorter was probably built in Manastee.)

In 1987 the company became part of the Glasstream Group, the owner of many other boat brands. Glasstream encountered hard times due to a new Federal tax on the boating industry, but did achieve one racing success. A. L. Kirland in 1988 would race # A-16 “The Turn of The Century” for Glasstream winning the American Power Boat Association Division Championship in Key West. In October 1989, Glasstream Boats filed for bankruptcy protection and on March 30, 1990 Century became part of GAC Partners (General Marine) under company turnaround expert Richard Genth

General Marine was looking for investment partners for Century and agreed to let foreign-owned Yamaha hang outboards on its sterns. In 1995 Century was purchased by Yamaha which had purchased Cobia Boats a few months earlier; the new company was called C&C Boats.

In March 2005 Yamaha sold Cobia and stated it would concentrate on “one brand, one vision” concept. In 2007 alone Century sold 1,000 boats and employees thought that things were on a upswing. But on December 1, 2009 Yamaha without warning and just a few weeks before Christmas announced it was dropping its Century line. Century had at this point had 45 dealers in 18 states. In July Yamaha stated Century’s assets were up for sale.On April 1 ,2011 Century Customer Service and Warranty functions were moved to Yamaha Headquaters in Kennesaw ,GA. while decommissioning and sale of assets of Century Boat in Panama City, FL. continued.

1 thought on “History of Century boats”