Our Yamato battleship model is 100% handcrafted by artisans from scratch by “plank on frame” construction method, using high-grade woods such as rosewood, mahogany, teak, and other exotic woods. The model need hundreds of hour to complete by skillful and creative master craftsmen. We use all finest material and metal fittings to build the model, no plastic. Our model was built according to scale through original plans, pictures and drawings. This Yamato model comes ready to be display on a wood-base.

Yamato (大和), named after the ancient Japanese Yamato Province, was a battleship of the Imperial Japanese Navy. She was lead ship of her class. She and her sister Musashi were the largest, heaviest, and most powerful battleships ever constructed, displacing 72,800 tonnes at full load. The class carried the largest naval artillery ever fitted to any warship – 460 mm (18.1 in) guns which fired 1.36 tonne shells.

The ship held special significance for the Empire of Japan as a symbol of the nation’s naval power (‘Yamato’ was sometimes used to refer to Japan itself), and its sinking by US aircraft in the final days of the war during the suicide Operation Ten-Go is sometimes considered symbolic of Japan’s defeat itself.

The Yamato class was built after the Japanese withdrew from the Washington Naval Treaty at the Second London Conference of 1936. The treaty, as extended by the London Naval Treaty of 1930, forbade signatories to build battleships before 1937.

Design work on the class began in 1934 and after modifications the design for a 68,000 ton vessel was accepted in March 1937. Yamato was built in intense secrecy at a specially prepared dock to hide her construction at Kure Naval Dockyards beginning on 4 November 1937. She was launched on 8 August 1940 and commissioned on 16 December 1941.

Originally, five ships of this class were planned. The third, Shinano, was converted to an aircraft carrier during construction after the defeat at the Battle of Midway. The un-named “Hull Number 111” was scrapped in 1943 when roughly 30% complete, and “Hull Number 797”, proposed in the 1942 5th Supplementary Program, was never ordered.

Be the first to review “Yamato” Cancel reply 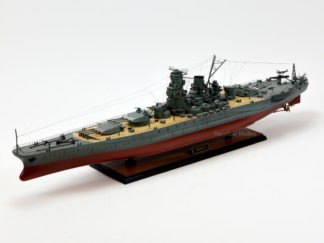