USS Arizona (BB-39) was laid down on March 16, 1914, launched on June 19, 1915, and commissioned on October 17, 1916. A Pennsylvania class battleship of the United States Navy, she was the third vessel to be named in honor of the 48th state. After shakedown off the east coast and in the Caribbean, she operated out of Norfolk, Virginia until November 1918, when she made a brief cruise to France.

On December 13, 1918, Arizona served as part of the honor escort convoying President Woodrow Wilson to Brest, France. In January 1920, she joined Battleship Division 7 for winter and spring maneuvers in the Caribbean. She operated out of Guantanamo Bay during this period, and also visited Bridgetown, Barbados, in the British West Indies, and Colon, Panama in the Canal Zone, before she sailed north for New York, arriving there on May 1.

Placed in reduced commission on July 15, 1929, Arizona remained in yard hands for the next 20 months. Upgrades included new tripod masts, new anti-aircraft guns, and additional armor. She also received new boilers and new main and cruising steam turbines. She was placed back in full commission on March 1, 1931. The ship and her crew were featured in the 1935 film Here Comes the Navy, which made extensive use of both exterior footage as well as on-board location shots.

Arizona was moored in Pearl Harbor’s “Battleship Row” on the morning of December 7, 1941, when Japanese carrier aircraft attacked. She was hit by several bombs, and the resulting explosion totally wrecked the forward hull, collapsing her forward superstructure and causing her to sink, with the loss of over 1100 of her crewmen. The wreck of the battleship still remains at Pearl Harbor. In 1950, she began to be used as a site for memorial ceremonies, and in the early 1960s a memorial structure was constructed across the ship’s sunken remains. Arizona was awarded one battle star for service in World War II.

Be the first to review “USS Arizona BB-39” Cancel reply 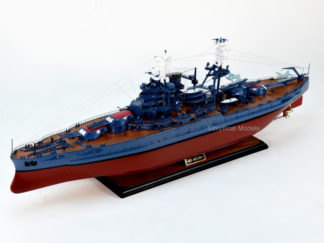