John D. McKean is a fire boat that served the New York City Fire Department as Marine Company 1. She is named after John D. Mckean, who died in a 1953 steam explosion while trying to save a predecessor fire boat, the George B. McClellan.

John D. McKean cost $1.4 million. She fought a notable fire at the Staten Island Ferry Terminal, in 1991. It was one of the fire boats, along with Fire Fighter and the retired John J. Harvey, that responded to Manhattan during the September 11th attacks to supply firefighters with water after water mains broke following the collapses. The boat helped rescue passengers from US Airways Flight 1549, when she made an emergency landing on the Hudson River in 2009.

Now you can get this beautiful John D. McKean for your model ship collection. Our master craftsmen handcrafted these nicely detailed models from scratch using her photographs, drawings, and original plan. The model is built to scale with top quality wood such as teak, mahogany with hollow superstructure and hull. She is 100% handcrafted individually using plank-on-frame construction method and are similar to the building of the actual ship. Each model requires hundreds of hours to finish and must go through a demanding quality control process before leaving the workshop. This John D. McKean model is mounted on a solid wood base and ready to display.

Be the first to review “John D. McKean” Cancel reply 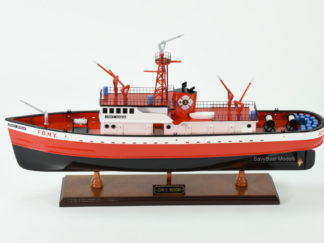