The  SS Normandie ocean liner built in Saint-Nazaire France for Compagnie Générale Transatlantique. When launched in 1932 she was the largest and fastest ship in the world, and she maintains the distinction of being the most powerful steam turbo-electric propelled passenger ship ever built. Her novel design features and lavish interiors have led many to to consider her the greatest of all ocean liners. Despite this, she was not a commercial success, and relied partly on government subsidy to operate.

In 1942, while being converted to a troopship during World War II, SS Normandie  caught fire, capsized, and sank at the New York Passenger Ship Terminal. Although she was salvaged at great expense, restoration was deemed too costly, and she was scrapped in October 1946.

Normandie’s maiden voyage was on 29 May 1935. Fifty thousand saw her off at Le Havre on what was hoped would be a record-breaking crossing. Normandie reached New York after four days, three hours and two minutes, taking away the Blue Riband from the Italian liner, Rex. This brought great pride for the French, who had not won the distinction before. Under the command of master Captain René Pugnet, her average on the maiden voyage was around 30 knots (56 km/h) and on the eastbound crossing to France, she averaged over 30 knots (56 km/h), breaking records in both directions.

During the maiden voyage, French Line refused to predict that their ship would win the Blue Riband. However, by the time the ship reached New York, medallions of the Blue Riband victory, made in France, were delivered to passengers and the ship flew a 30-foot-long (9.1 m) blue pennant. An estimated 100,000 spectators lined New York Harbor for Normandie’s arrival. All passengers were presented with a medal celebrating the occasion on behalf of CGT.

Normandie had a successful year but RMS Queen Mary, Cunard White Star Line’s superliner, entered service in the summer of 1936. Cunard White Star said the Queen Mary would surpass 80,000 tons.  At 79,280 tons, Normandie would no longer be the world’s largest. French Line increased Normandie’s size, mainly through the addition of an enclosed tourist lounge on the aft boat deck. Following these and other alterations, Normandie was 83,423 gross tons. Exceeding the Queen Mary by 2,000 tons, she would soon become the world’s largest in terms of overall measured gross tonnage and length once again, claiming it off the Queen Mary who only held it for a short amount of time

Be the first to review “SS Normandie” Cancel reply 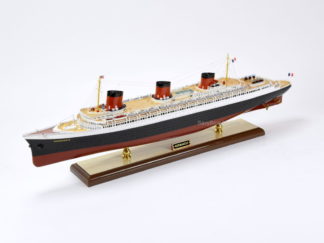