The beloved Nieuw Amsterdam was built before World War II and proclaimed “the ship of tomorrow”. She was an art deco gem following the trend of the day in interior decoration and exterior design. Originally she was to be named Prinsendam, however during construction, Holland America Line decided to name their new flagship Nieuw Amsterdam, in honor of the Dutch settlement of New Amsterdam, modern-day New York. Construction on the new liner was carried out at the N.V. Rotterdam Drydock Company. Christened by Queen Wilhelmina in April 1937, Nieuw Amsterdam was, at 36,982 tonnes, the largest liner ever constructed in the Netherlands up to that time. Proudly she was dubbed the Dutch “Ship of peace” since there were no provisions for possible war use incorporated in her design. At the time SS Nieuw Amsterdam was more completely protected against fire, had the largest air conditioning plant and the highest percentage of private baths of any ship afloat. The ship was also the only liner with a fully equipped and air conditioned theater

Now you can get this museum quality model of SS Nieuw Amsterdam right in your own home or office. SavyBoat master craftsmen handcraft these nicely detailed models from scratch using historical photographs, drawings and original plan. They are built to scale with top quality wood such as rosewood, teak, and mahogany. The SS Nieuw Amsterdam replica is 100% handcrafted individually using plank-on-frame construction method and are similar to to building of actual ship. Each model requires hundreds of hours to finish and must go through a demanding quality control process before leaving the workshop. There are two version of SS Nieuw Amsterdam replica available, you can find the grey hull version from here Nieuw Amsterdam grey hull

Be the first to review “SS Nieuw Amsterdam” Cancel reply 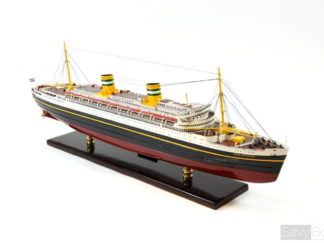