We offer this museum quality model SS Ile de France for your maritime collection. Our master craftsmen handcrafted this nicely detailed model from scratch using historical photographs, drawings, and original plan. In addition, we selected finest woods and material to build this model. Also, we used plank-on-frame construction method which is similar to the building of the actual ship.

You can find many details of the model such as: All windows, doors, and portholes are cut out precisely thanks to hand-built hollow superstructure and hull; Open promenade decks visible through superstructure windows; Lattice grating on ducts and vents; Detail Lifeboats hung from launching davits; Delicate railings on forecastle, aftcastle and top superstructure; Rigging and stay-lines on all masts and smokestacks. Furthermore, we applied multi-layered paint to match the color of the real ship.

SS Ile de France was built by Chantiers et Ateliers Saint-Nazaire, France for Compagnie Générale Transatlantique (CGT) like many of the French Line’s great passenger ships. Launching in 1926, she was CGT’s largest ship and the sixth largest in the world

Her maiden voyage on 22 June 1927 was from Le Havre to New York by way of Plymouth.  Laid up in New York when World War II began, Ile de France returned home, but to Marseilles rather than Le Havre, in May 1940. She was on a trooping mission to Indochina when France fell in June 1940. Ile de France was then taken over by the British and served as a troopship, under Cunard management, for the balance of the war. She reverted to French control (but still under Cunard management) in September 1945 and served another year as a troop and repatriation ship before being returned to CGT in February 1946.

Her postwar career for CGT began in October 1946 on an austerity service from Cherbourg to New York. A two-year overhaul was begun in April 1947. The most noticeable change was the reduction of her funnels from three to two. She returned to service on her old Le Havre-New York route in July 1949.

In 1956, SS Ile de France rescued some 750 of the passengers from Andrea Doria after he collision with Stockholm. Two years later she was laid up and then sold for scrapping in Japan. Renamed Furanzu Maru for the journey to Japan, she became a movie star on her way to the breakers, being used under the name Claridon in the movie “The Last Voyage”. After filming, she was taken to Osaka and scrapped in 1959. 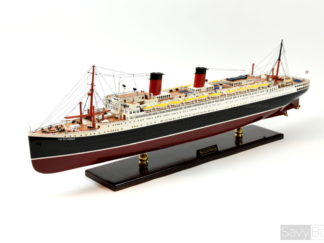