SS Canberra was an ocean liner, which later operated on cruises, in the P&O fleet from 1961 to 1997. She was built at the Harland and Wolff shipyard in Belfast, Northern Ireland at a cost of £17,000,000. The ship was named on 17 March 1958, after the federal capital of Australia, Canberra. She was launched on 16 March 1960, sponsored by Dame Pattie Menzies, GBE, wife of the then Prime Minister of Australia, Robert Menzies. She entered service in May 1961, and made her maiden voyage starting in June. She appeared in the 1971 James Bond film Diamonds Are Forever. In the 1982 Falklands War she served as a troop ship. In 1997 the singer and songwriter Gerard Kenny released the single “Farewell Canberra” which was specially composed for the last voyage.

Now you can get this beautiful SS Canberra model for your home or office. Our master craftsmen handcrafted this nicely detailed model from scratch using historical photographs, drawings, and original plans. In addition, we selected the finest woods and material to build this model, using the plank-on-frame construction method which is similar to the building of the actual ship.

Furthermore, the model contains many details: All windows, doors, and portholes are cut out precisely thanks to hand-built hollow superstructure and hull; Open promenade decks visible through superstructure windows; Lattice grating on ducts and vents; Detail Lifeboats hung from launching davits; Delicate railings on forecastle, aftcastle and top superstructure; Rigging and stay-lines on all masts and smokestacks… we apply multi-layered paint to match the color of the real ship.

Each model requires hundreds of hours to finish and must go through a demanding quality control process before leaving the workshop. Finally, she is mounted on a solid wood base and ready to display. It’ll make a perfect gift for home or office decorator, boat enthusiast, or passionate collector.

Be the first to review “SS Canberra” Cancel reply 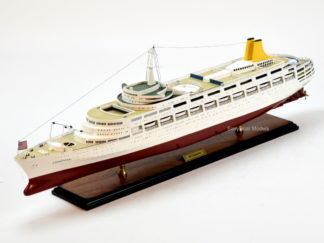