We offer this museum quality model SS Bremen ocean liner for your maritime collection. Our master craftsmen handcrafted this nicely detailed model from scratch using historical photographs, drawings, and original plans. In addition, we selected finest woods and material to build this model. Also, we used the plank-on-frame construction method which is similar to the building of the actual ship. Each model requires hundreds of hours to finish and must go through a demanding quality control process before leaving the workshop. We mount the model on a solid wood base and she is ready to display. It’ll make a perfect gift for home or office decorator, boat enthusiast, or passionate collector.

SS Bremen was a German-built ocean liner constructed for the Norddeutscher Lloyd line (NDL) to work the transatlantic sea route. Bremen was notable for her bulbous bow construction, high-speed engines, and low, streamlined profile. At the time of her construction, she and her sister ship Europa were the two most advanced high-speed steam turbine ocean liners of their day. The German pair sparked an international competition in the building of large, fast, luxurious ocean liners that were national symbols and points of prestige during the pre-war years of the 1930s. She held the Blue Riband, and was the fourth ship of NDL to carry the name Bremen.

Bremen was used as a barracks ship; there were plans to use her as a transport in Operation Sea Lion, the intended invasion of Great Britain. On 16 March 1941, Bremen was set alight by a crew member while at her dock in Bremerhaven and completely gutted. A lengthy investigation discovered that the arson was the result of a personal grudge against the ship’s owners, and was not an act of war. Starting in 1942 she was dismantled to the waterline so the steel could be used for munitions. In 1946 her remains were towed up the River Weser, beached on a sandbar off Blexen, Nordenham and destroyed by explosives, though some parts of the double hull remain visible to this day.

Be the first to review “SS Bremen” Cancel reply 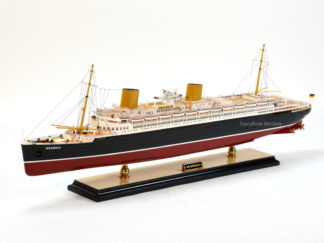