We offer this beautiful SS Brasil model for your home or office. Our master craftsmen handcrafted this nicely detailed model from scratch using historical photographs, drawings, and original plan. In addition, we selected finest woods and material to build this model. Also, we used plank-on-frame construction method which is similar to the building of the actual ship.

You can find many details of the model such as: All windows, doors, and portholes are cut out precisely thanks to hand-built hollow superstructure and hull; Open promenade decks visible through superstructure windows; Lattice grating on ducts and vents; Detail lifeboats hung from launching davits; Delicate railings on forecastle, aftcastle and top superstructure; Rigging and stay-lines on all masts and smokestacks. Furthermore, we applied multi-layered paint to match the color of the real ship.

SS Brasil was an ocean liner launched at Ingalls Shipbuilding in Pascagoula, Mississippi in 1957. Initially, the ship was originally named Brasil for Moore-McCormack’s South American service, but was renamed a number of times. During its history the ship served as a cruise ship and later served in the Semester at Sea program as Universe Explorer. The ship was scrapped in Alang, India, in 2004 sailing under the name Universe for the final voyage.

SS Brasil was a replacement for Moore-McCormack’s SS Brazil (1928). Brasil and her sister ship, Argentina, used MARAD Design P2-S2-9a of United States Maritime Administration. At the time of her construction, Brasil was said to be the largest ship built in the “deep south”

Ingalls Shipbuilding had the lowest US bid at $24,444,181 ($203 million today) for each of the two ships. The Maritime administration subsidized the cost of construction by paying $19,528,362 ($162 million today) to support the US shipbuilding industry. Meaning that the ships would have cost nearly $20 million less if they had been built outside the United States. As of 2015, Brasil and Argentina were among the last luxury liners built in the United States. Design included Denny-Brown stabilizers,  a system of retractable fins in order to stabilize the ships in heavy seas. The ship design originally included a solarium for nude sun tanning inside the false funnel.

Be the first to review “SS Brasil” Cancel reply 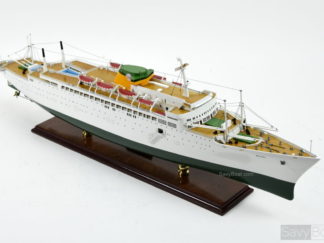