SMS Ostfriesland was the second vessel of the Helgoland class of battleships of the Imperial German Navy. Named for the region of East Frisia, Ostfriesland’s keel was laid in October 1908 at the Kaiserliche Werft dockyard in Wilhelmshaven. She was launched on 30 September 1909 and was commissioned into the fleet on 1 August 1911. The ship was equipped with twelve 30.5 cm (12 in) guns in six twin turrets, and had a top speed of 21.2 knots (39.3 km/h; 24.4 mph). Ostfriesland was assigned to the I Battle Squadron of the High Seas Fleet for the majority of her career, including World War I.

Along with her three sister ships, Helgoland, Thüringen, and Oldenburg, Ostfriesland participated in all of the major fleet operations of World War I in the North Sea against the British Grand Fleet. This included the Battle of Jutland on 31 May – 1 June 1916, the largest naval battle of the war. The ship also saw action in the Baltic Sea against the Russian Navy. She was present during the unsuccessful first incursion into the Gulf of Riga in August 1915.

After the German collapse in November 1918, most of the High Seas Fleet was interned in Scapa Flow during the peace negotiations. The four Helgoland-class ships were allowed to remain in Germany, however, and were therefore spared the destruction of the fleet in Scapa Flow. Ostfriesland and her sisters were eventually ceded to the victorious Allied powers as war reparations; Ostfriesland was transferred to the United States Navy. She was sunk during air power trials off the Virginia Capes in July 1921.

Her main armored belt was 300 mm (12 in) thick in the central portion, and was composed of Krupp cemented armor (KCA). Her main battery gun turrets were protected by the same thickness of KCA on the sides and faces, as well as the barbettes that supported the turrets. Ostfriesland’s deck was 63.5 mm (2.5 in) thick.

After the German collapse in November 1918 (end of World War I), most of the High Seas Fleet was interned in Scapa Flow during the peace negotiations. The four Helgoland-class ships were allowed to remain in Germany, however, and were therefore spared the destruction of the fleet in Scapa Flow. Ostfriesland and her sisters were eventually surrendered to the victorious Allied powers as war reparations; Ostfriesland was transferred to the United States Navy, where she was known as battleship “H”. She was sunk during air power bombing trials off the Virginia Capes in July 1921, along with a number of pre-dreadnought, U.S. battleships and other ships.

Because of the bombing tests conducted by the famous air power advocate, U.S. Army, Brigadier General William “Billy” Mitchell, the Ostfriesland should be one of the most famous battleships in history. If Gen. Mitchell could sink a modern Dreadnought battleship, using only biplane bombers, then Mitchell could prove that the age of the battleship was over, and that the age of the airplane and aircraft carrier had begun. The Navy could save lives and money by not building big, obsolete battleships and focus on more important priorities.

The Navy brass however, did not appreciate his efforts to prove that their prized battleships were obsolete, and set the “rules” for bombing the Ostfriesland, so as to make it almost impossible to sink the ship (i.e. small bombs, high altitudes, frequent inspections, etc.).

Gen. Mitchell, refused to comply with the restrictions and ordered his bombers at Langley Field to be loaded with 2000-pound bombs. The aircraft would come in for their bomb runs at low rather than high level. Mitchell had also trained his pilots to drop their bombs alongside the ship rather than actually hitting the ship directly. He had learned that the water hammer effect of a large bomb going off in the water alongside the ship would act like a mine or torpedo and tear the bottom apart.

Gen. Mitchell’s plans worked. The combination of direct hits and near misses caused the Ostfriesland to roll over and sink. It was reported that on the observation ship Henderson, senior Naval Officers were in tears, knowing that the age of the battleship was over.

Mitchell was a hero to some, but to the leaders of the Army and Navy he had disobeyed orders. His rank was reduced from Brigadier General to Colonel and he was removed from the Air Corps. Mitchell continued to advocate for U.S. Air Power until his famous court martial for insubordination when he accused military leaders of ignoring the air corps and endangering the safety of military pilots. Mitchell was drummed out of the Army and died in 1936. After World War II, the U.S. Congress recognized the sacrifice that Mitchell had made to help U.S. airpower and to sound the alarm for our military preparedness in a changing world.  Mitchell was posthumously awarded the rank of Major General and given a special Medal of Honor by Congress. Mitchell, with the battleship Ostfriesland, had earned a place of honor in our history.  Mitchell is the only individual for whom an American military aircraft design, the North American B-25 Mitchell, is named. He is buried at the Forest Home Cemetery, Milwaukee, Wisconsin.

Be the first to review “SMS Ostfriesland” Cancel reply 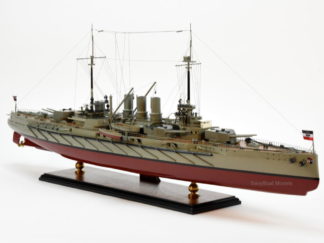