The Riva Aquarama was designed by Carlo Riva in the 1960s. The Riva is noted as one of the most legendary and famous speedboats out there. It is available as a FULLY ASSEMBLED model ready to be proudly display as a piece of history. Master craftsmen handcraft these highly detailed wood models from scratch using historical photographs, drawings and original plan. The model Riva Aquarama has been built to scale with high-grade wood such as: western red cedar, rosewood, and mahogany.

They are 100% hand built individually using plank-on-frame construction method and are similar to the building of actual ships. Each Riva Aquarama model requires hundreds of hours to finish and must go through a demanding quality control process before leaving the workshop. This is truly beautiful model of the Riva Aquarama with western red cedar and mahogany hull. There are multiple tones of wood decking on the bow. You can find exquisite details from the leather works to all the realistic gauges. All fittings such as windshield frame, wiper, navigation lights, mirror, flag pole are made of stainless steel. The cockpit has two hand stitched individual leather seats as well as a rear passenger seat. The swimming platform also comes with stainless steel hand rails. The model rests on a wooden stand for easy display.

After stringent testing of the 1962 prototype, the Lipicar, the Riva Aquarama entered production in 1963. The hull was completely identical to that of the Open Tritone, whose production was ended, with many technical and functional improvements. The most obvious were the anchor housing in the bow closed with a hatch, the raised edge to the fore deck and the varnished Honduras dashboard and its rim with the new VDOs. The front seats were separated, with a pocket on the rear of the driver’s backrest and a folding shelf on the back of the other.

The recessed sunbathing area in the stern was tapered unlike that of the Riva Tritone and was easier to reach from the bathing ladder thanks to a non-slip area set into the stern deck. There was considerable research to improve noise and cruising comfort. The sides were initially still of carvel, but laminated sides were fitted starting from # 4. The upholstery of the first models was white ribs with black borders and orange trim. From the end of 1963 also the Super Aquarama was on sale.

The 1964 series was enriched by the updates described for the Tritone, plus a new icebox located under the cockpit sole between the two rows of seats. The sole was now fitted with sliding hatches instead of hinged ones. From # 34 the bottom was modified in the same way as that of the Tritone. Chrysler engines were used in 1966 and some prototypes produced with different bottoms, the bottom of # 178 was to be that of the 1967 series. As well as the new bottom, sweeter for cruising, the Aquarama and Super could flaunt the new Riva engines, outcome of the collaboration between Riva and Crusader.

Furthermore, a marine WC was installed under the bunk and the upholstery was now turquoise/ivory for the Aquarama and lobster/ivory for the Super. The 1969 series, with # 309, had a new, more raked stempost, with new cutwater and a new bow cap whose design consisted of a single air intake instead of the previous two. From # 316 the deck was 9 cm higher at the stern. In 1971, with # 444, the design and number of the engine bay air intakes located on the sides of the bulwarks was changed (now only two). Production of both the Aquarama and the Super Aquarama was ended with ”Lipicar IV”, # 486. In 1972 seven Long (Lungo) Aquaramas were produced, called thus because they were 8.72 m long, i.e. 22 cm more than the last Supers (from # 496 to 502). They, too, had only two air intakes on the sides, as with the final examples from 1971, and new engine starter buttons with rubber caps on the dashboard. 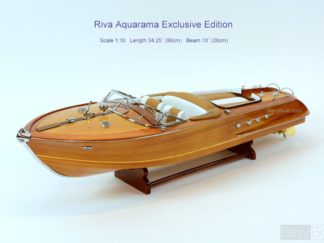