The Queen Elizabeth 2 was the flagship of the Cunard Line for nearly 40 years.  She made her maiden voyage in 1969 and was one of the last great Transatlantic liners. At 70,327 tons and 963 feet long with a top speed of 32.5 knots she is also one of the fastest and grandest passenger vessels ever built. Queen Elizabeth 2 is arguably the most famous liner in the world.

She was designed for the transatlantic service from her home port of Southampton, UK, to New York, and was named after the earlier Cunard liner RMS Queen Elizabeth. She served as the flagship of the line from 1969 until succeeded by RMS Queen Mary 2 in 2004. Designed in Cunard’s then headquarters and regional offices in Liverpool and Southampton respectively, and built in Clydebank, Scotland, she was considered the last of the great transatlantic ocean liners until the construction of the Queen Mary 2 was announced.

Now you can get this beautiful model of Queen Elizabeth 2 right in your own home or office. SavyBoat master craftsmen handcraft these nicely detailed models from scratch using historical photographs, drawings and original plan. They are built to scale with top quality wood such as rosewood, teak, and mahogany. The Queen Elizabeth 2 replica is 100% handcrafted individually using plank-on-frame construction method and are similar to the building of the actual ship. She has been applied multi-layered paint to match the color of the real ship with highly-detailed such as: laser cut doors and window so you can see thru superstructure, thanks to a hollow hull and hollow superstructure. Each model requires hundreds of hours to finish and must go through a demanding quality control process before leaving the workshop. This Queen Elizabeth 2 replica is mounted on a solid wood base and ready to display.

Be the first to review “Queen Elizabeth 2” Cancel reply 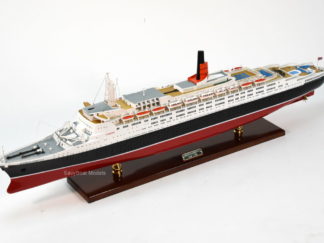