HSwMS Gotland (1933) was a cruiser of the Swedish Navy built by Götaverken as a seaplane carrier with room for twelve aircraft. When presented with the design Sweden’s Naval Construction Board decided that they wanted the ship to have cruiser and minelaying functions as well as operating as a seaplane carrier. The resulting 5000 ton design presented in January 1927 proved impossible to build within the available budget of Sk16.5 million. The design was then reduced in size requiring one of the forward turrets be removed. Its guns were then placed in casements either side of the superstructure. The construction contract for the ship was issued on 7 June 1930. S 9, Hawker Osprey, Ready for start on HSwMS Gotland

Its aircraft complement consisted of six Hawker Osprey seaplanes. It had capacity for eight and attempts were made to purchase two more, unsuccessfully since they weren’t manufactured anymore. The planes were found to suffer from wave damage during rough weather often forcing the ship to return to port.During World War II Gotland sighted the German battleship Bismarck when it broke out of the Baltic Sea. That was reported to Swedish Navy headquarters but the message was intercepted by the British embassy which triggered the allied chase of the great battleship.

HSwMS Gotland was converted in 1944 to an anti-aircraft cruiser due to a lack of modern seaplanes. This involved the removal of the seaplanes and the addition of four 40 mm Bofors guns and two 20mm L/70 guns.The Ospreys continued in service at harbour bases with the last being decommissioned on 2 December 1947.

After World War II she served as a training ship. Starting 1953 and finishing in 1954 she was modified to allow her to serve as fighter direction ship in the event of war as well as a trainer in peacetime. She was decommissioned in 1956, stricken in 1960, sold in 1962 and finally scrapped in 1963.

Be the first to review “HSwMS Gotland (1933)” Cancel reply 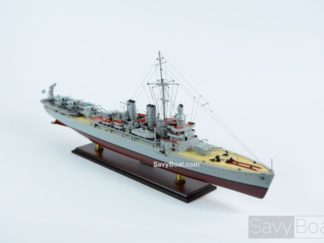