HMS Victory Museum Quality – One of a kind.

The world’s most famous warship HMS Victory is a first-rate ship of the line of the Royal Navy with 104 guns and 850 men when at full capacity. She was ordered in 1758, laid down in 1759 and launched in 1765. Victory wasbest known for her role as Lord Nelson’s flagship at the Battle of Trafalgar on 21 October 1805. In 1922, she was moved to a dry dock at Portsmouth, England, and preserved as a museum ship. She has been the flagship of the First Sea Lord since October 2012 and is the world’s oldest naval ship still in commission.

This is one of a kind HMS Victory 10 feet long museum-grade model with more than 3000 working hours of SavyBoat’s master craftsmen. We carefully select the finest wood and use historical photographs, drawings or original plans meticulously handcraft this highly detailed ship from scratch. The ship is 100% hand built individually using plank-on-frame construction method and are similar to the building of actual ships.

The model includes so many details such as:  It features plank on frame, three decks, and three ferocious rows of metal cannons on each side of the ship. The front bowsprit and three large masts are connected securely using advanced rigging and lines painstakingly knotted and fastened by hand. Each yard has an attached hand-stitched rolled-up sails made of fine linen. Metal anchors and a wooden rudder are visible on the front and rear of the ship. On the deck and 2 side of the ship, there are authentic hand-built lifeboats with ribs and planks, stationed metal cannons, metal steering wheels, wooden crane, captain’s dining and sleeping cabin, and many other handcrafted ornaments. There is also an exquisite detailed admiral’s quarter on the stern with beautiful metal lanterns lighted, more than 400 handcrafted die-cast metal hand-painted figures on the ship. 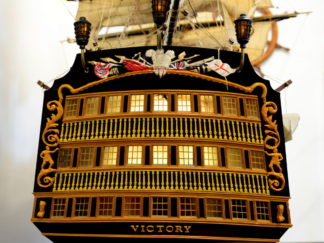