HMS Sovereign of the Seas

SOVEREIGN OF THE SEAS

Sovereign of the Seas was the most magnificent ship of her era. Designed in 1630’s by Phineas Pett she was the first ship to have three full gun decks, carrying 102 guns on the orders of King Charles I. No one knew the cost of her construction. Renamed the Royal Sovereign when Charles II came to the throne in 1660. She fought in several battles during the Second and Third Dutch Wars between 1666-1673. The Nine Years War against France broke out in 1689 and the Sovereign of the Seas (Royal Sovereign) was present at the Battles of Beachy Head in 1690 and Barfleur in 1692 when the Royal Navy fought alongside the Dutch. Her career came to an abrupt end when she accidentally caught fire at Chatham on 27 January 1696. These days Sovereign of the Seas remains one of the most intricate historic ship models to build.

This is the beautiful model of Sovereign of the Seas for your collection. The model has a unique wood inlay base and many gold plated fittings. SavyBoat’s master craftsmen build Sovereign of the Seas using historical photographs, drawings or original plans. We built her to scale with high-grade wood such as: western red cedar, rosewood, and mahogany. Furthermore, we hand built the hull using plank-on-frame construction method and are similar to the building of actual ships.

Each model requires hundreds of hours to finish and must go through a demanding quality control process before leaving the workshop. This magnificent Sovereign of the Seas model features plank on frame, three decks with ferocious metal cannons on each side of the ship.  We craft unique bowsprit from metal and then gold-plated. The front bowsprit and three large masts are connected securely using advanced rigging and lines painstakingly knotted and fastened by hand. Each yard has an attached aging handmade sails made of fine linen. Metal anchors and a wooden rudder are visible on the front and rear of the ship. Finally, there are many hand carved sculpture details gold-plated on the ship. She sits on a unique marquetry base made from 100s of individual small wood pieces inlay. 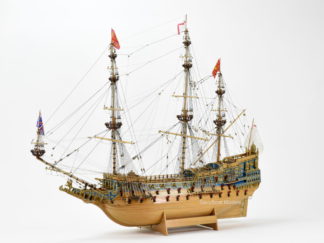