The tug’s towing gear consists of a single drum, Almon Johnson, hydraulic towing machine. With level wind, outfitted with 2000(ft) of 2(in) of towing wire. On her bow she is outfitted with two Nabrico Electric / Hydraulic, 50 ton winches fitted with 1(in) wire rope.

Our Edmond J. Moran tugboat model is designed to give you the salty appearance of the original boat. The model is handcrafted at museum quality from high-grade woods such as mahogany, teak, and other exotic woods. The hull is constructed using a plank on frame method, each strip of exotic wood are carefully joined together to form a smooth hull. This model is completely hand built by skillful and creative master craftsmen. We built our models according to scale through original plans, pictures, and drawings. We absolutely use no plastic parts, only the highest quality wood, and metal parts. This model is carefully packed with two thick layers of Styrofoam for a damaged free shipping purpose. 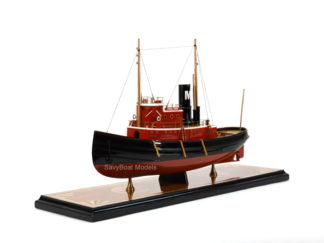