Colombo Express holds 8,749 twenty-foot equivalent units (TEU), 730 refrigerated (reefer) TEUs, is 1,099 feet (335 m) long, and has a beam, or width, of 140 feet (43 m). She is owned by the German shipping company Hapag-Lloyd, and operated by its Hapag-Lloyd Container Line division. She is named for Colombo, the largest city in Sri Lanka, which the predecessor company, North American Lloyd, first called on in 1886. She is the first of eight proposed Colombo Express class vessels, and is only slightly larger (approximately 4%) than her Savannah Express class cousins, the 8400 TEU (700 reefer) ships Savannah Express and Houston Express.

Now you can get this beautiful  Colombo Express container ship for your home or office. Our master craftsmen handcraft these nicely detailed models from scratch using her photographs, drawings and original plan. The model is built to scale with top quality wood such as teak, mahogany with hollow superstructure and hull. She is 100% handcrafted individually using plank-on-frame construction method and are similar to to building of actual ship. Each model requires hundreds of hours to finish and must go through a demanding quality control process before leaving the workshop. This model is mounted on solid wood base and ready to display.

Be the first to review “Colombo Express” Cancel reply 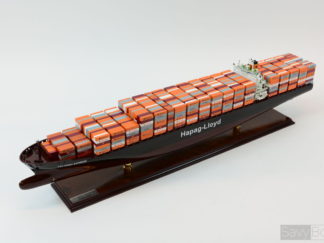