Harold Stirling Vanderbilt funded construction of Ranger, and she was launched on May 11, 1937. She was designed by Starling Burgess and Olin Stephens, and constructed by Bath Iron Works. Stephens would credit Burgess with actually designing Ranger, but the radical departure from the heavy displacement sailing yachts was attributal to Stephens himself who had first used the design in Dorade, winner of the 1931 Trans-Atlantic Race. Geerd Hendel, Burgess’s chief draftsman, also had a hand in drawing many of the plans.

The hull was all-steel welded by a shielded arc process with a weight-saving aluminum, arc-welded, mast counterbalanced with a 110-ton lead keel supported by an arc-welded steel keel plate. 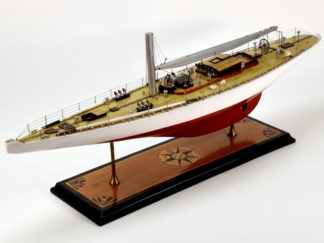